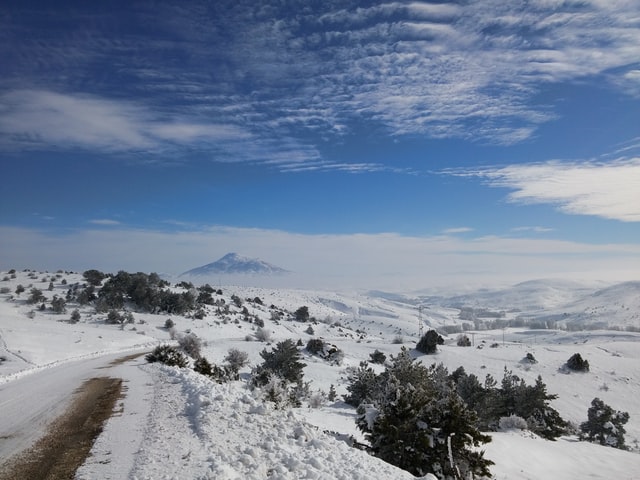 Created with yellow-colored travertines in Sivas, ‘Altınkale’ attracts attention with its feature of keeping warm and cold together in winter. In the region where the air temperature is below zero, the water with a temperature of 40 degrees spreads over the travertines. The steam released by hot water in cold weather creates an interesting sight.
Sivas Prepared by the Governorship of Pamukkale travertines in the Hot Çermik Thermal Tourism Region, 31 kilometers from the city center, ‘Altinkale‘project dazzles with its beauty in every season. Due to the high amount of sulfur in the hot spring water, yellow-colored sediment is formed and the region, which is named ‘Altınkale’ for this reason, has added a different dimension to tourism in Sivas.
‘Altınkale’ gained a different feature with the winter. While some of the snow puddles covered the travertines, a yellow and white image appeared in the area along with the other exposed parts. The fabulous beauty created with the steam generated by hot water attracted attention.
While the water coming out of the thermal spring in Altınkale spreads to the travertines, it cools down and freezes as it goes down. Altınkale, where there is snow on one side and hot water of 40 degrees on the other, attracts a small number of visitors on the days of restriction.

‘A VERY GOOD VALUE FOR SİVAS’

Servet Baş (38), who came to visit Altınkale, said, “It suits our Altınkale çermiğ. Like the twin of Pamukkale. I can say that it was even more beautiful than Pamukkale. It has added a beautiful value to Sivas. it became even more beautiful with the project, “he said.
Harun Aydın (40) said, “I have been living in Sivas for years. the project is a very good value for Sivas. It has been a very high-quality place. It is like the twin of Pamukkale. It is pleasing to use the water from the hot springs in this way. “he spoke. Engin Nailsci (39) said, “All the people of Sivas know this place. Tents were set up here in our childhood. Nowadays, it is a very good thing for our country to make better works and innovations. I went to Pamukkale and this place is like his twin. I say consent. It makes us happy to see such things. “