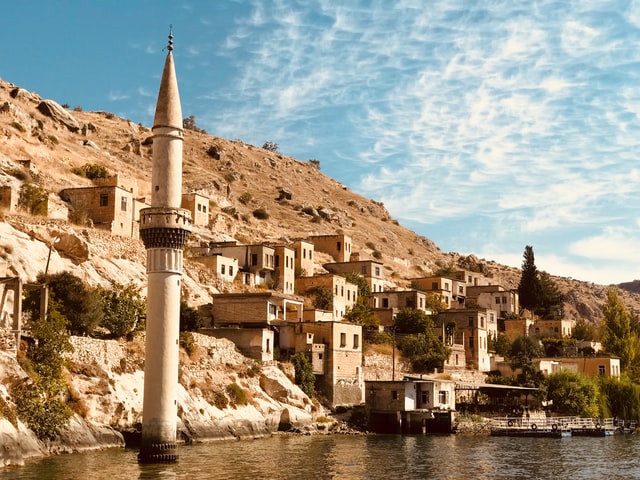 Halfeti is partly within the borders of Gaziantep, some within the borders of Urfa, and in the middle is the Euphrates River, which creates a Mediterranean climate effect. Once upon a time, there was no fruit that did not grow by the river, and there was no food that was not made with these fruits. Until the gardens are underwater. Now he’s trying to go back to those days. Fruit Food Festival is an important part of this.
With the opening of the Birecik Dam in 2000, the swelling of the Euphrates River drowned its surroundings, not only settlements but also most of the agricultural areas were flooded. Connected to Şanlıurfa Halfeti Three-fifths of the is under the river today. It’s easy to say, it’s been 21 years. The people of Halfet live in the upper region on the slope of the river called New Halfeti, but time still flows here ‘before and after the dam’. It does not seem possible to forget such a big change in a short time or to express it in a different way.

The people of Halfet are trying to enrich these barren slopes with the black roses that have become the symbol of the region with their beloved bergamot and plum trees. Various collaborations were made with the governorship and the municipality to revitalize horticulture, and free fruit saplings were distributed. Halfeti joined Cittaslow, the ‘Calm City’ network, which is an extension of Slow Food in 2013. Halfeti Slow Food union two years later, so slow food union was established. At its head is Nihat Özdal, who was born and raised in Halfeti.
Slow Food Halfeti is doing good things. For example, with the initiative of the union, sales of toast and hamburgers were banned in schools in Halfeti for nutritional awareness. The Directorate of National Education also supported this. A move is worthy of both a slow city and a city with a slow food network. Families have been advised to put appropriate, healthy, nutritious food from home with their school-going children. Instead of hamburgers, chickpea wraps and a kind of homemade pastry seems are sold in canteens, which are among the nutritious alternatives of the region. They also organize a Fragrance Festival dedicated to black roses and Mesopotamian hyacinths. Ethnobotanical research is carried out within the scope of the event, that is, the versatile functionalities of plants in people’s lives are revealed and recorded. Figs have been for generations,

PLUM OF PLUM AND FISH WITH BLACK POWDER …

One of the most important missions of the Union is to protect Halfeti’s culinary culture. After the agricultural fields and orchards were flooded, they took action to avoid any memory loss in their kitchens and to reveal culinary stories. They visited the houses and kept an inventory of information such as traditional kitchen tools, cooking methods, seed storage, and archived their recipes. During these visits, they saw that among the recipes they collected, there were many fruit dishes from the past and still in use. In this context, they have been organizing a Fruit Food Festival since 2015. Don’t let the cultures flood, the stories should not be forgotten… Isn’t that what we all wish?
Nihat Özdal, who is also the mastermind of the festival, defines Halfeti cuisine as a ‘river cuisine’. The fertility of the lands fed by the Euphrates River, river fish, the ecosystem of the surrounding rocks, and the Mediterranean microclimate… All these immediately shape the cuisine here. Some of the dishes made with lettuce apricots, dried mulberry roast with butter, quince bulgur pilaf, mulberry with egg, plum with egg, challa vaccine, cherry pan fruit
Among the fruit dishes, the most important thing is the plum pan and burlap roasting. For the plum pan, green canned plums are cooked in a casserole and stone oven with lamb cubes. Raw figs are called out in the region. Raw figs are roasted with onion and sumac sour in puff roasting. The river fish ‘shabut’, which is believed to have been used since the Sumerians, is also very important. In Turkey, only living in the Tigris and Euphrates rivers SABUT, then dried in red mulberry collected and covered with a sauce made of, covered and cooked on older leaves with pomegranate tree Pistachio tree sticks.

– Traditional handicraft training and practices at Halfeti Public Education Center have opened the doors of new professions and income for local women. You can visit the center and shop.
– Take part in boat tours. The drum and zurna team can also be arranged to go with the tour for those who wish. You will see the Greek Castle, the King’s Daughter Cave, the old Greek tombs, the Sunken City, the Kahtin Village, and the Savasana Village, which has become the symbol of the region and offers a surreal image with its only minaret above water.
Turkey